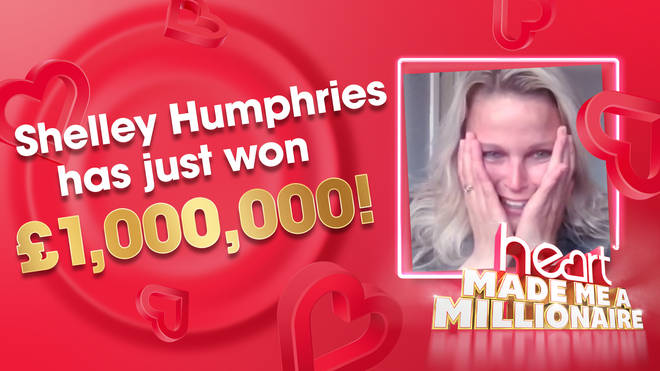 Shelley Humphries, burger van owner & mum of five, from Northampton won the life-changing sum in the live final of £1,000,000. Shelley plans to donate to great Ormond Street & treat her family with her winnings.

Heart listener Shelley Humphries was crowned Britain’s newest millionaire live on Heart Breakfast with Jamie Theakston and Amanda Holden this morning (Friday 28th May), when she won a life-changing £1,000,000 in Heart’s Make Me A Millionaire competition.

Shelley Humphries, a burger van owner and mum of five from Northampton, scooped the biggest prize in UK radio after entering the competition which has seen hundreds of winners take home prizes ranging from £1,000 to £20,000 over the past 13 weeks.

In an extraordinary morning on Heart Breakfast, Shelley took home the grand prize of £1,000,000 after originally turning down £10,000 for the chance to be in the draw – one of the biggest prize funds to be turned down by any finalist.

Speaking about her win, Shelley Humphries said: “I’m on top of the world right now, it’s so surreal. To win £1million means so much to me, it will make such a difference to my life and it’ll open up so many opportunities for me and my family. It means I’ll be able to say yes to my children more often.”

Shelley told Heart listeners why Great Ormond Street is so special to her as they treated her nieces from when they were tiny babies. Now she plans on donating to Great Ormond Street telling Jamie and Amanda: “I have two nieces that they helped at a very, very young age, at six weeks old both of them… I nearly lost my dad … and I just can’t thank them enough and being able to say thank you to them is a first and a must.”

Shelley also hopes to take her family on holiday, telling Heart: “I’ve never had all my children with me together on one holiday before and so I’m hoping to be able to go on a family holiday to Portugal. I’d also like to upgrade my burger van – I’d love one with a bit of heating in or maybe even a café where you can have the heating on permanently!”

Heart’s Make Me a Millionaire launched on 1st March and over the past three months each winner has faced an ultimatum – to take that day’s prize fund or forgo the money to enter into the Million Pound Final for the chance to win £1million. The dramatic live final took place in a specially constructed vault live on Heart Breakfast this morning and began with 38 contestants in the running to win the life-changing sum. Some finalists had turned down cash prizes of up to £13,000 for the chance to be in the Million Pound Final.

A lottery machine randomly selected the final nine contestants for the Grand Final, with the tenth place then won live on air as listeners played one final round of the Heart’s Make Me A Millionaire game. In the order they were selected at random by the lottery machine, the final contestants were then invited to choose a numbered, securely sealed safety deposit box, which was then opened by Amanda Holden live on air and on Global Player. Nine out of ten boxes in the vault contained the message ‘Heart Make Me £1,000 richer’, with one box holding the Million Pound message.

Winner Shelley Humphries was eighth to select a box from the vault, and revealed that the numbers she had originally planned to choose had already been taken by other contestants who picked before her.

All safety deposit boxes were securely sealed and kept under strict lock and key, with only the independent adjudicator aware of their contents. The nation tuned in as the drama unfolded live on Heart, Global Player, Twitter, and Facebook.

Heart brought back the hugely popular competition for a second year for 2021, following its enormous success in 2020.

Amanda Holden and Jamie Theakston dressed up in celebration of the momentous occasion, with Amanda wearing a spectacular red jewel encrusted dress and Jamie donning a matching bow tie.

Heart Breakfast’s Jamie Theakston said: “This morning was very special on Heart Breakfast as we crowned the winner of Heart’s Make Me a Millionaire. It was a great honour to share this life-changing moment with Shelley. Make Me a Millionaire is the biggest competition in UK radio and the suspense and drama that we’ve witnessed over the past 13 weeks has captivated listeners. We’d like to thank everyone who took part and we send huge congratulations to Shelley.”

Heart Breakfast’s Amanda Holden said: “We are so thrilled for our wonderful winner Shelley. It truly has been the most incredible and emotional morning on Heart Breakfast, and it was our great privilege to crown Shelley as our very worthy winner. All of us at Heart send all our best wishes and many congratulations to Shelley and her family.”

VIDEO: Watch the emotional moment the winner was crowned HERE

Heart is the largest commercial radio brand in the UK, and part of Global

We are pleased to share our Member Spotlight featuring Evina.

Take some time to find out more about Evina’s new services and where they will be speaking next.

aimm will be speaking at MEF CONNECTS – Digital Transformation on the 26th May discussing Trust in Payments at 11.00 am 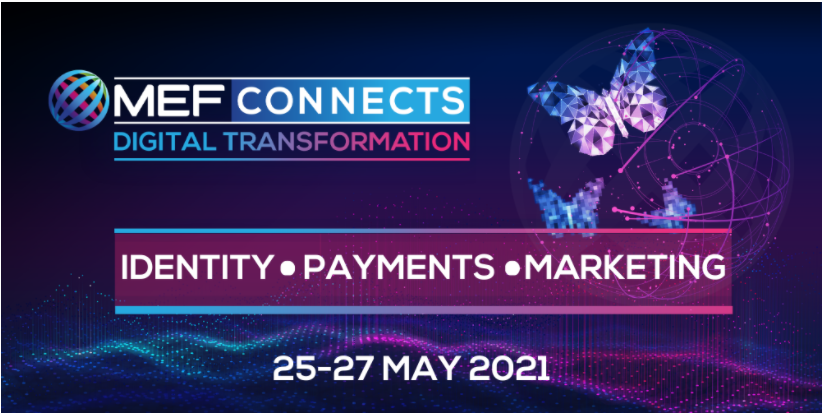 From Tuesday May 25th to Thursday 27th MEF will host its third online event this year MEF CONNECTS Digital Transformation. Over the 3  days you will have the opportunity to get a better understanding of Mobile Identity and Authentication, Direct Carrier Billing [DCB], Mobile Wallet, Mobile Advertising, Conversational Commerce and much more.

Don’t miss out on aimm’s session on the Tuesday discussing trust in Payments alongside EE and Mastercard.

Evina, the leading specialist in cybersecurity for mobile payments, has unveiled a new tool that extends the anti-fraud protection throughout the entire monetization flow, starting from the source of traffic. 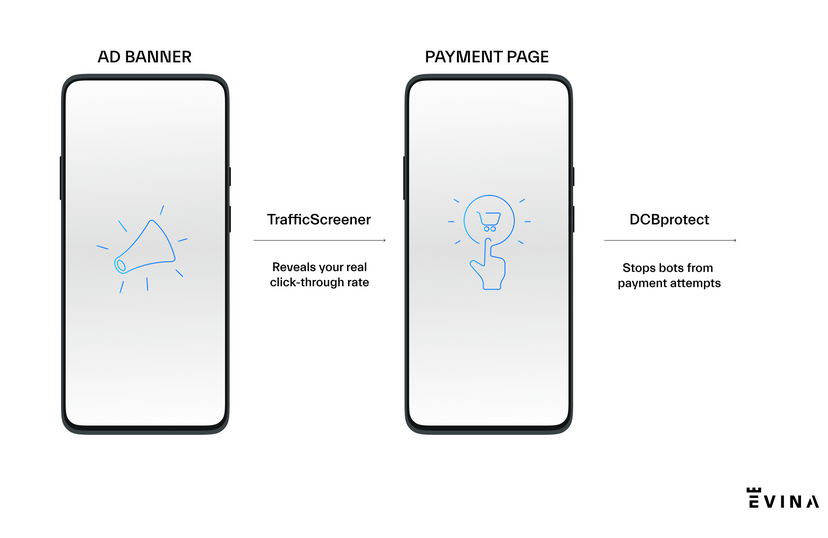 After creating Evina DCBprotect, the market’s best anti-fraud solution to block bots at the time of payment, Evina now leverages the same cutting-edge technology to detect bots as they arrive on a merchants page.

According to Farid Taha, Chief Customer Officer at Evina: “When dealing with a CPC (cost per click) model, merchants need to know what type of click – fraudulent or authentic – is leading to their webpage. This has long been a blind spot when dealing with ad traffic and it’s why Evina created a tool that provides visibility on all visits following ad clicks.”

Mr Taha elaborates by explaining that, in mobile traffic monetization, the objective of merchants is to optimize their media buying. This is done by evaluating traffic sources via cost per click, click through rates, conversion rates and invalid clicks. Effective media buying depends on reliable data analytics and when there is a lot of undetected fraud in the form of bots making click-throughs, the decision-making process becomes skewed.

“With TrafficScreener, the real conversion rate is revealed through the detection of fake visits. This means merchants can decrease fraudulent traffic, boost conversion rates and ultimately increase their revenue,” adds Mr Taha.

This new product represents the flip-side of Evina DCBprotect which stops bots from making payment attempts. Now, traffic monetization can be mastered while fraudulent payments by bots are similarly prevented. While DCBprotect protects the payment page from bots, Traffic Screener detects bots that derive directly from the banner ads. By revealing real traffic and real conversation rates, merchants can optimize their mobile monetization activities. The aim is to reduce the 20% of budget merchants lose when they acquire fake traffic.

Specifically, TrafficScreener enables merchants to receive real figures that reflect the quality of their traffic. Healthier traffic sources can be rapidly identified while fraudulent ones can be quickly cut off. The product even enables merchants to be reimbursed for fraudulent traffic as Evina can provide proof of bot-based activities. Finally, merchants gain a competitive advantage and higher conversion rates by accessing valuable data analytics that enable smarter decision-making.

Thanks to over 15 years of R&D in cybersecurity for mobile payments, Evina’s anti-fraud technology now analyzes more than 16 million transactions per day worldwide. Some 99.94% of fraudulent transactions are detected, with a 0.06% false positive rate recorded, and less than 100ms latency.

Evina’s primary objective is to strengthen cybersecurity practices by informing MNOs and players that make up the mobile ecosystem on the inner workings of fraud to better protect mobile users and businesses.

Together with leading mobile industry associations such as MEF and the GSMA, Evina is helping to create a mobile ecosystem built on trust and transparency and underpinned by smart solutions that create prosperity.

Evina regularly produces case studies with renowned MNOs, updates on the latest types of fraudulent techniques, and reports that provide market players with information on country fraud rates, the most common regional fraud techniques, and the trending malicious apps.

BBC Children in Need have an exciting opportunity for a Head of Appeal Operations to join the team on a 12 Month Fixed-Term Contract.

This is a critical role for the charity, leading the extensive Appeal Campaign in the autumn period.  The Head of Appeal Operations is responsible for the successful delivery of all operational elements of the annual BBC Children in Need Appeal Campaign.

BBC Children in Need is the BBC’s UK Charity, and exists to make a positive difference to the lives of disadvantaged children and young people across the UK.  Our refreshed objectives and activities will ensure the impact we have on children’s lives is front and centre of the work the charity undertakes over and above the projects and services we fund.

The closing date for this role is the 4th May, and all details about the role and how to apply can be found: HEAD OF APPEAL OPERATIONS ROLE